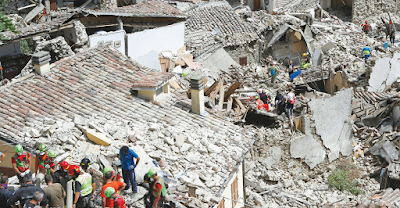 From an article published in 112 Emergencies Journal.
Disclaimer: the views expressed in this paper solemnly engage the author

Picture credit:
Above: Damages in Accumoli after the Central Italy earthquake in August 2017

All the piuctures from: 112 Emergencies journal.

Italy has always been exposed to disastrous natural events, in the collective imagination it has become the symbol of living exposed to risk, almost as if it was inevitably condemned to suffer the natural catastrophe. Are things still this way?

Following the great emotional impact that accompanied the dramatic events like the earthquakes in Belice, the Po and Arno floods, and continued with the earthquakes in Friuli and Irpinia, from the end of the sixties in Italy the need to create a technical structure that was able to coordinate the operational phases of an environmental emergency in a systematic way and with appropriate procedures became apparent. That's why the Civil Protection was founded.

The term "Civil Protection" encompasses the concept and the ethical value for which a Government protects its citizens: the State is made of citizens, who, if necessary, protect each other. From this reference point, many other concepts started to enrich and strengthen the meaning of this institution, so that today we all recognize its irreplaceable value.


With the progress of science and with it, the possibility of protection from natural hazards, the concept of emergency started to move side by side other important concepts, such as risk prediction and prevention, which unequivocally demonstrate a significant change in the way we conceive the meaning of protection of society from danger. In fact, the modern Civil Protection doesn't only manage operations during an emergency, but has a new ethical and social function that sees it as a constantly active body in changing the culture of rescue and emergency into the culture of prevention and risk reduction. The current Department of Civil Protection is certainly busy managing the several emergencies in our territory, but it is also involved in forecasting, warning and prevention activities, that are carried out through financing scientific research projects, the issuance of guidelines for possible studies as well as the plans of action to undertake to achieve risk reduction, the management of environmental monitoring networks, and especially through the implementation of educational campaigns and by providing the population at risk with valuable information. It is precisely the awareness and education of the population, with projects and campaigns such as "Io no rischio" ("I don't risk") and Edurisk, that lay down the first stones to set a new relationship between institutions, citizens, science and territory.

Recent studies have clearly established that the Italian population has gained very little awareness of the seismic risk to which it is exposed. That is why education through capillary and continuous information campaigns to the population is the key to facilitate new ways of tackling these risks and to promote the culture of prevention.


The concept of risk also includes the social vulnerability and thus the resilience of a community, in other words its ability to respond to a disaster and to recover by restoring the material and spiritual conditions that existed before the event occurred. This ability can also be enhanced by informing and educating about the existence of these dangers and on how to prevent them. The tragic events that continue to affect Italy, from earthquakes to floods or landslides, indicate that there is still much to do in terms of prevention. There is no culture of risk culture in our country, nor the full awareness of the fragility and value of our land. This ignorance is reflected in our constant lack of preparation to deal with not only the most rare extreme events, but also the most common and frequent natural disasters.

Who has the responsibility to sort out these issues? Through which tools? And in light of which criteria? Prevention involves both the entire social body and each individual. Everyone has their own share of responsibility in taking care of the common good. There are aspects of which the State must necessarily take charge, through a structure like the Civil Protection, with its operational mission and ethics. But there is also an ethical duty of each person to improve their preparation and to get ready to cooperate, a duty that as well as having value in itself and for themselves has the advantage of producing positive effects on the whole community. Therefore, the lack of preparation in the face of a potentially disastrous event is not just a political or technical issue, but more generally of all of us citizens, that we too often tend to delegate our safety to the responsibilities of others, or even, to entrust ourselves to fate. Defense against natural hazards is a form of respect for our human intelligence and a civic duty towards society.


Other articles published in the IAPG blog:
http://www.geoethics.org/articles-from-iapg-blog

IAPG Nigeria
Abuja, Nigeria
The International Association for Promoting Geoethics (IAPG) is a multidisciplinary, scientific platform for widening the debate on problems of Ethics applied to the Geosciences.